Powered by
CRYPTO TRADING
In 2008 Satoshi Nakamoto, an unknown person or persons published a paper (“Bitcoin: A Peer-to-Peer Electronic Cash System”) which argued the raison d’etre of existing payment systems. According to Satoshi the main issue with payment systems was that their operation was based on centralised networks. Centralised networks were built on trust as they kept transaction records on central servers. Trust however - and so centralisation - was a two-edged sword. Firstly, it meant high transaction fees to a third party (i.e. a bank), which thought to be not only an unnecessary expense but it also slowed down transaction times. Secondly, centralisation and trust were the only acknowledged and legally operating ways of processing transactions. Satoshi raised the question: would there be another, simpler and cheaper, non-centralised way to execute transactions?

Satoshi created a ground-breaking decentralised digital payment system, based on a peer-to-peer (p2p) network. By developing a network (or ecosystem) which is controlled by its participants, Satoshi managed to avoid third party central authorities, for example central banks and/or government. The network was built on blockchain technology and its cash, based on encryption technology, was named 'cryptocurrency'. Blockchain technology became a public transaction ledger, and the very first cryptocurrency was born, now known as 'Bitcoin'.
​
One of the most promising altcoins is Electroneum (ETN). Unlike other coins, this is the first cryptocurrency (and up to date: the only one) that can be mined (i.e. earned) with a mobile phone. (See more about mining in the following paragraph.) Other cryptocurrencies require high CPU power from computers, therefore if someone wants to profit from mining he would have to invest in expensive specialised computers (ASICs, Application-Specific Integrated Circuits). Electroneum can be mined both with computers and mobile phones. Its application and usage gets wider by the day. Most experts predict a very bright future for it and call it the “new PayPal system”. The Electroneum miner app can be downloaded from your relevant app store (both for IOS and Android). By using referral code: 24AAB9 the user can get extra mining efficiency boost. This means the mobile phone will mine faster and more ETNs will be earned than it would happen.
​ 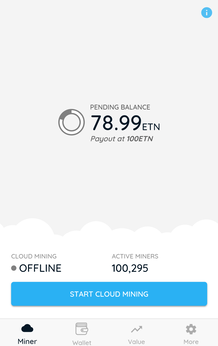 Electroneum Mobile Miner
​In the blockchain technology, transactions are recorded publicly in a network of numerous computers all around the world. Computers are linked (i.e. 'chained') together and they update network data every few minutes by processing complex algorithms. Every transaction gets verified several times by several computers, and the work – called mining – that each computer has done gets recorded as what is called ‘proof-of-work’. Mining also which also results in the creation of more coins. Once a transaction has happened and verified numerous times – by the miners –, the data will be in the blockchain and cannot be erased anymore. This safety feature of blockchain technology has resulted in public trust in it, even though this also means once a transfer has been processed, it cannot be undone. Transactions recorded several times provide evidence of the transactions but since transactions are deeply recorded in the blockchain they cannot be cancelled.

Owners of cryptocurrencies have keys as evidence of their ownership over their transacted coins in the currency network. Keys are stored in digital or paper wallets. An advantage of these wallets is that only owners have access to their wallets. However, if they lose their wallets, they cannot be recovered. Since blockchain and cryptocurrencies are decentralised, nobody has access to recovery wallet addresses.
​
​As cryptocurrencies are digital currencies without control or overview on them by central banks or any other trusted third parties, there are legal challenges around the idea of their decentralised systems. A trusted third party normally takes transaction fees to verify that an individual has transferred its money to another person. Since there is no centralised third-party in any blockchain, governments, banks and other intermediaries have no ability to control or verify transactions in them. Because transactions are controlled by thousands of computers linked together globally, banks and governments neither can intervene transactions, nor can regulate them.