Powered by
THE TRADES I TAKE BUT DON'T SIGNAL
When talking about trading, I do not like to use the words “strategy”, “system” or “method”. Each of them suggests a magical, unique, never-before-presented, mysterious solution to all kinds of issues that a trader might face. Usually scammers like to use these words to sell their complete crap trading software or trading courses. Their promise is to finally reveal the biggest trading secret in a form of a “strategy”, a “system” or a “method”. That’s all bullshit. There is no secret strategy, no system that does wonders, and no trading methods that would always win. Hence, I am confused right now. I don’t know how to talk about the following notstrategy that is actually a strategy, notsystem which is a kind of a system, and notmethod even though it is very methodical. Anyhow, I hope you understand that what I am about to present below is not a Holy Grail to trading. Yet, this whateveryoucallit will help you to make money in a few simple steps.

The beauty of the technique I’m about to describe is that it has a very rare, 1:8 risk:reward ratio. This means, theoretically one may have 7 losing trades in a row. If the trader only wins the 8th trade, he or she could still be in profit!

Because of the nature of this strategy, I have to admit though, LOTS of losing trades can occur. But, as it will be proven below with some statistical data, even with the huge number of losing trades one can gain significant profits in the long term due to the 1:8 risk:reward ratio.

How it all started…

I wanted to have a strategy that is:
Since Instagram is full of monkeys who contact me regularly asking how easy it is to make money if they sign up to my service, I took time and tried to come up with a “system” that’s easy to learn.

First of all, who are the Instagram Monkeys? They are the ones who post either of the following:
These are the ones who are unable to learn anything about trading, yet they want to become rich. If possible, by tomorrow.

I wanted to find something that is easy to learn and may make money, even for Instagram Monkeys. So, several weeks ago I started backtesting many trading… strategies/methods/techniques/whatever… on several Forex symbols with several indicators. Amongst these indicators RSI, MACD and Bollinger-bands were included. For some reason none of them worked as well as… (drums please!) a simple retracement strategy!

What is a “retracement”?

If we plot for example a 21 Day Exponential Moving Average (EMA) on our charts, we can see that candles are hovering around this indicator. For shorter or longer period of times, candles may move away to either direction from the moving average, but after a while, the 21EMA like a magnet, brings them back to its line.

What I was looking for is... respect, bruv!

I wanted to find out which Forex pair respects the 21EMA the most. I.e. which one or ones have the highest probability that they will pull back to the 21EMA if they temporarily move away from it?

I have tried 575 different settings. (This explains why the whole experiment lasted for WEEKS.) The more I tried, the more I realised that the less complex the settings are, the higher rewards the trades can have. One might think using MACD, RSI, different moving averages and Bollinger-bands together or in certain combinations should make trading decisions easier. Well, not always. (Not especially for wannabetrader Instagram Monkeys.)

My backtests have shown that THOUSANDS of pips could have been collected in the last nearly two years (from 1st January 2017 - to be exact) if the following strategy/method/system/technique would have been followed:

I told you. Very simple. Actually, TOO simple. Let’s see some statistics to prove how highly profitable this strategy/method/system/technique could have been since the beginning of 2017, up to date (end of November 2018). 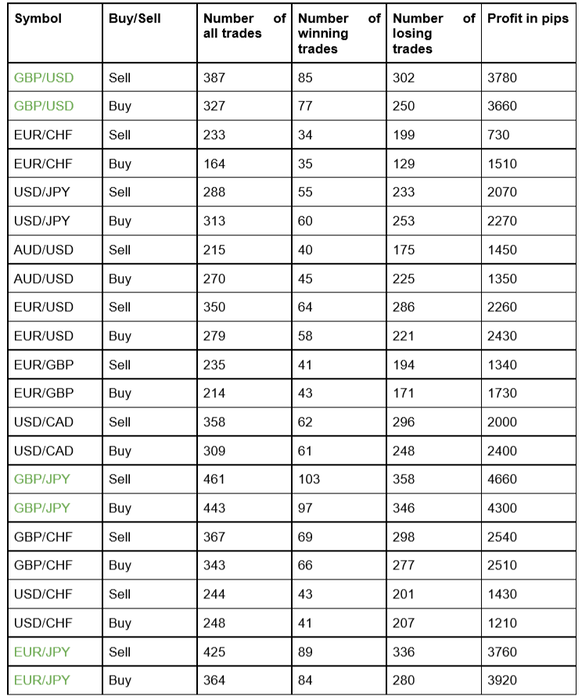 In order for this strategy to work high volatility is needed. Pairs which hardly ever move significantly away from their 21EMAs, will not produce much profits. For example, EUR/CHF.

As I said earlier, I have tried 575 different settings when I was running the backtests. Found that anything less than 10 pips for SL & 80 pips for TP would have produced significantly less profits. And, anything more would NOT have produced significantly more profits. If for example we were targeting 90 pips profit, the overall thousands of winning pips would have only increased by a hundred or less. Meanwhile, if we were to target only 60 pips profit on each trade, the thousands of overall profits would have been cut nearly in half! Same with looking for Support and Resistance levels or for other indicators’ readings. Yes, I admit, looking for them is VERY USEFUL, but as mentioned at the beginning, I wanted something that is SIMPLE. So simple, that even Mr. Rabbit Ears can understand it, apply it, and make money with it day in and day out. Trust me, when I say “21 Daily EMA retracement with 10 pips for Stop Loss and 80 pips for Take Profit”, there is a very good reason why I am suggesting these settings. And that reason is; the 575 settings and variations I have tried!

Now, as you can see and as I have already mentioned it, a lot of losing trades come with this strategy. This leads me to another question you may have. Why I don’t signal all the trades I may take using this strategy?

The answer is - without being (too) harsh - because I have way too many STUPID trial subscribers. When I have one or two losing trades in a month in relatively close to each other in time, the number of subscribers getting upset suddenly increased. That’s the nature of running a signals service, I accept it. Some people are just mentally so disabled, that they cannot understand that losing trades are part of this game. No honest signal provider has no losing trades at all. But, with proper risk management, and without the wish to become a millionaire within a few days or weeks, losing trades will not disappoint anyone… except some retarded subscribers.

As some trial subscribers’ mental abilities are extremely limited, I don’t and I won’t signal any of these trades that I am now regularly taking using this strategy. This is the reason why I wanted to tell you about it so that you can use it on your own. Setups are easy to find. Just watch how far price moves from the 21EMA on the Daily charts. Once it has moved at least 10 pips away, enter a trade to the opposite direction, targeting 80 pips profit with a 10 pips stop loss. Don’t forget not to be an idiot, expecting every single trade to win. Consistency is key here!

PS. Now I just need to figure out how to make Mr. & Mrs. Rabbit Ears understand not only this system but, also what an ETFRX subscription can do to them. For their biggest disappointment, they won’t go from a Ford Fiesta to a Bentley within 10 days, that’s granted. Not too sure which one is easier to comprehend, the above system or what they can financially achieve with an ETFRX subscription…?
Powered by